After publishing a whole series on the classic jewelry forms of India, it only makes sense that your next question would be "But what about the groom?! Isn't there anything for him?"

I'm here to tell you that the groom can totally look gorgeous on his wedding day with the help of these key traditional ornaments:

The safa, or wedding turban, is the most common groom accessory in South Asian weddings.  It is actually worn by all the men in the wedding party, not just the groom. 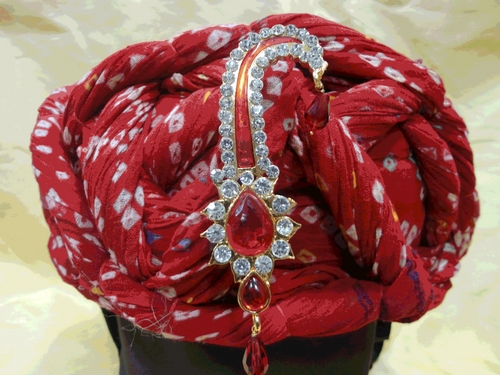 It comes in a variety of colors and styles, like the Jaipuri and Rajasthani ones above, and is part of the cultural traditions of many communities across religious and state lines.

The safa sometimes comes as a length of fabric that is tied into a turban but nowadays they usually come pre-formed and supported with cardboard.  But if you like the rustic appeal of the tied fabric style, there are a variety of videos on youtube that teach you how to tie it properly.

The sehra is a pretty common accessory for the groom at a South Asian wedding.  It is usually a screen of strung flowers, beads, or gold foil that cover the groom's face.  Typically the bride also covers her face at weddings where the sehra is worn to honor the tradition of the original arranged marriages where neither the groom nor the bride saw their betrothed before the wedding.

Different South Asian communities have their own take on the Sehra and some don't even do it.  In the Punjabi wedding shown below, the groom's family performs a pooja called the Sehrabandi where they sing and tie the sehra to his safa.

During the ceremony, the veil is pushed aside and hung over the safa (don't worry, you'll be able to see your future wife at some point on your wedding day).

The sarpech brooch is worn on the safa (usually on the right side).  It is supposed to resemble a plume, but I think it looks more like a paisley or upside-down J.  The kalgi refers to the feathers that are sometimes attached to the top of the sarpech.

Sarpeches were originally created to look symmetrical but the asymmetrical shapes are favored today.

Historically, the sarpech was worn by Hindu and Muslim princes in India and has also been found in Persia and Turkey. It was also very popular among European nobility in the 17th and 18th centuries.

The most sophisticated Mughal kalgi historically had three black heron feathers was reserved for royalty.

These brooches became so popular after they appeared in the 16th century that by the 19th century some that were made were large enough to cover half the turban.  They began to sport more kalangis, or smaller tuft-like jewelry projections that hinged on to the center plume.

These were meant to be worn across the turban.  Sarpeches could have any odd number of kalangis with tin-kalangis having three tufts and panch-kalangis having five.  The one shown below is a panch-kalangi because it has five separate parts, include the plume-like piece in the center. The sarpech is made using the same jewelry techniques as many bridal pieces.  The gems are inserted into a gold base using the Jadau process and often sarpech pieces have Meenakari enameling on the back or more Jadau gem work.  The motifs of each piece tend to be floral and are inspired by Mughal textiles.

Sarpeches today vary in size, based on the taste of the wearer.  They can include tiara-like chains that circle the turban and any odd number of kalangis.  They can basically be scaled anywhere on the bling spectrum from minimal to Mr. T.

In addition to everything listed above, the South Asian groom can wear pretty much whatever he pleases.  The bride's family as well as his own will usually give jewelry gifts to both the bride and the groom before the wedding ceremony which may or may not be worn on the day of.

If jewelry isn't your thing, consider a fancier, bedazzled dhoti instead.

In conclusion, the rule for grooms (and brides!) is do what you're comfortable with.  There is so much variety available to the modern South Asian groom; He can mix and match any of the ornaments listed here.  He could even wear all of them or none of them.

Personally, I don't mind a groom with fashion sense and a bit of glamour.  Live it up, put on those extra chains, it's your wedding day!

Remember, guys are allowed to feel pretty too.