The Silk Road Part 3: Do No Harm

Welcome to Part III of our Silk Road Series!

In response to animal right activists, new ranges of silk that use non-harmful methods of procuring the silk are being produced in India and other countries.  Among these are Ahimsa, or peace silk, and Vanya, or wild-caught, silk.

These still only make up a small part of the silk industry in India, as shown below (Eri, Muga, and Tasar).  Most of the silk market is still mulberry silk produced by Bombyx mori silkworms.

Ahimsa silk, which takes it's name from the Sanskrit word meaning 'non-violence' and Buddhist tradition, only uses the silkworm's cocoons after it has become a moth and flown off.

In the usual silk production procedure, the female moth is often sliced open after it has laid its eggs to ensure them are not diseased.  This of course kills the moth.

Ahimsa, by contrast, does not allow for any unnecessary silkworm killing and operates by harvesting cocoons from wild enclosures or semi-captive  silkworms.

Unlike Bombyx mori silkworms which exclusively eat mulberry leaves, Eri, Muga, and both types of Tasar silkworms eat a whole range  of plants including castor, kesseru, payam, som, sualu,  oak, arjun, asan, and sal which come from the wild jungles of India. 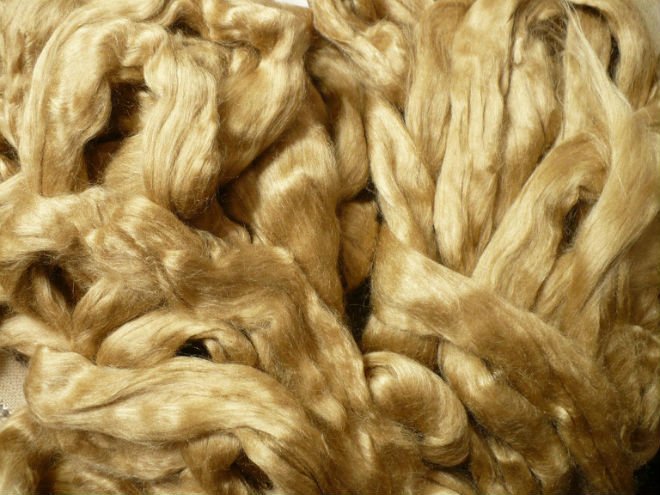 Eri, Muga, and Tasar silks have been around for centuries and have their own unique qualities. Eri silk, for instance, is suppposed to be incredibly durable.  When the British occupied India, they were enraptured with it and called it 'Palma Christi.'

Muga silk (above) is naturally gold and shiny and sometimes it is used as a substitute for gold thread in zari work. Tasar silk actually appears in the Ramayana in Sita's wedding trousseau and is traditionally supposed to be worn by every Indian bride.

Ahimsa is very similar to ancient silk-making procedures, as we discussed before.  The method of non-violent silk extraction used today comes from Andhra Pradesh.

Though it is a bit rougher than mulberry silk because it often uses broken threads, Ahimsa silk, according to textiles experts, has a much nicer fall and is warmer.

In various rural parts of the subcontinent, farmers make their living off the harvesting of silk cocoons.   This is fraught with difficulties as many rely on traditional methods of silkworm husbandry which often lead to the creation of diseased generations of silkworms.

There are now NGOs which work in India to introduce scientifically-based methods to aid in the farming of silkworms and improve the livelihoods of the destitute farmers that make a living off of them.  The video above goes into some of the issues surrounding rural sericulture.

Despite the noble intentions of Ahimsa silk producers, according to PETA representative Ashley Byrne, there has been documented evidence of regular, non-cruelty free silk sold under the name of Ahimsa.  We will go into more of the animal welfare issues of "non-violent" silk production in Part 4.

Vanya silk has been produced in North Eastern India, the tribal areas of Central, Eastern India, and in the sub-Himalayan region for an indeterminately long time.  It is only in the last few centuries that it has become internationally popular.

In the 1800s, the European sericulture industry was wiped out by a silkworm disease, and mulberry silk producers in India were unable to satisfy the influx of demand from the West.  Thus Vanya silk began to make its way across the continent

Un-dyed Vanya silk comes in a range of textures and colors, reflecting the variety of foods the Eri, Muga, and Tasar silkworms eat.

While they use the same types of worm, Vanya and Ahimsa differ in that Vanya is entirely outdoors in unregulated areas while Ahimsa silk may be harvested in semi-captive areas or within outdoor enclosures.

Vanya silk, interestingly, remains cool in the summer rather than get suffocatingly hot in the summer (like mulberry silk).  It is also very warm in the winter.

Both Ahimsa and Vanya silks are often blended with other fabrics like cotton, wool, jute, or mulberry silk to make a range of apparel for men and women.

According to Aria Melton, former writer for Greenopedia, because peace silk cannot be machine-reeled and must be reeled by hand there are extra labor costs that come with peace silk.  As such, it tends to be pricier than mulberry silk.