10 Reasons Why Mindy Kaling is an Inspiration to Desi Women

Mindy Kaling, current producer and star of the Fox sitcom, The Mindy Project, has been a comedic icon for years since her writing on the Emmy-winning TV show, The Office. Her recent success has brought to light just how funny, down-to-earth, and stylish her character Dr. Mindy Lahiri (an extension of Kaling's alternate-profession self) truly is.

We at the BFIW absolutely adore Mindy - and not just for her polka-dotted glamour and crazy antics on the TV show! Her achievements so far - educational, professional, and personal - make her an excellent role model for South Asian women.

Kaling's demeanor and comedy relate to many Indian women and encourage them to embrace the best parts of their culture to bring out the most confident and admirable qualities.

We thought we would pay homage to Mindy Kaling by discussing exactly how she enlightens the modern Desi woman:

1. She's Indian, but NOT a stereotype - she's just a modern Desi woman

We see actors like Kunal Nayyar on The Big Bang Theory and Hannah Simone on New Girl written as the token ethnic friend. They occasionally speak in Hindi, partake in very Indian customs, and Raj Koothrapali even speaks in an Indian accent - just to remind us where they're really from. Kaling has never written any of her characters this way, because being Indian has nothing to do with how vapid Kelly Kapoor is or how romantic Mindy Lahiri wants to be.

Mindy's characters can be Hindu without being stereotypically so - they don't need to be seen praying or dressing the part just to be religious.

Mindy Kaling is every girl's ideal best friend, because she never tries to be anything that she's not. So even when she's not even trying to be a role model for South Asian women, she is! We're proud to be "Mindians."

2. She'll date whomever she wants and not be limited by cultural expectations

Mindy Kaling herself doesn't feel limited by her heritage when it comes to dating - she's written all of her characters as free women who will date whomever they find attractive, regardless of race.

Of course, that means Dr. Mindy Lahiri ends up dating a lot of white men - but there's nothing wrong with that! The modern Desi woman probably feels pressure from her relatives to continue her Indian culture by marrying an Indian man, but Mindy Kaling doesn't find that argument persuasive. Mindy Lahiri can be Hindu without needing to date another Hindu because she's confident in her own values not to require somebody else to uphold them. This is why she struggles when her ex-fiance Pastor Casey asks her to convert religions - why would any strong, self-assured woman do that?!

Both Mindy Lahiri and Kelly Kapoor feel comfortable with expressing themselves sexually, even if that's not an expected norm from Indian women. Although Dr. Lahiri's not a one-night stand kind of girl, she is a huge proponent of safe sex - medically and emotionally. Mindy might write her characters into some steamy sex plots, but her current character's hoarding a box of condoms in her bedroom just in case - safety first!

4. She pokes fun at being the "token" Indian in social environments

Mindy Kaling's modern view of dating and romance is relatable to any Indian women prying off unwanted attention from men who find them "exotic." Mindy finds herself an average, American woman - regardless of her ethnicity - and she uses The Mindy Project to criticize and parody some common reactions to dark-skinned women. A "fair" lesson to be learned, indeed!

Dr. Lahiri doesn't expect special treatment from her dates just because she's Indian - even if she does expect to be treated like a queen because she's awesome.

When it comes to priorities, Mindy Kaling is a prime example of South Asian values intermingled with the American dream. She worked hard to get to her current role today, as producer and star of her own network TV show. Kaling studied hard to get good grades, attended an Ivy League school, and worked her way up as an intern on Conan to a star in her own right!

We see Dr. Lahiri's Indian-mother attitude flare out when she lectures her little brother about the importance of education and staying in school - at a point when he wanted to drop out of Stanford to become a rapper. While she does later realize the value in chasing one's dreams, it's hilarious that her first freak-out instinct was the same that we would imagine our mothers would have if we told them we wanted to become hip hop artists.

6. She might be a successful, single woman - but she still holds onto that fairytale dream of finding her prince

Even though she wants a strong, stable career - Mindy Lahiri still holds out hope to marry a handsome hunk! She's smart and knows what she wants, which means she's willing to weed through all the slimy frogs to find her prince.

Both Mindy Kaling and Dr. Mindy Lahiri have put their careers ahead of the standard Indian goal of being married by 30. Neither one of them needs to feel down about herself just because she's single - especially when both of them are successfully running businesses. But that doesn't mean that educated, successful women can't have romantic fantasies too!

7. She has a realistic body image and is proud of it

Mindy admits that she'd love to lose 15 pounds now and then, but she'd love to enjoy her life more! Mindy writes her characters to reflect this view - as they have their self-conscious moments, but later realize how awesome they are as is. Mindy would rather eat her favorite foods and avoid painful exercises than be skinny and grumpy.

9. She's a style icon for all the right reasons

When's the last time you saw Mindy Kaling (or any of her characters besides the purposefully clueless Kelly Kapoor) dress inappropriately by revealing too much skin? I can't think of any!

That's because Kaling knows what suits her body and her skin tone. Bright colors and bold patterns make this woman one of the style icons of a modern 20-something, but she's got her Indian mindset straight.

Instead of feeling down about not being a size zero and letting media complaints about her weight get to her self-esteem, she dresses so amazingly that nobody (not even a nosy aunty) could deny her fabulous fashion sense.

Like the average Indian woman, Dr. Lahiri is surrounded (often overprotected) by family and friends. It can be overbearing at times, but Kaling takes this situation and derives some much-needed perspective from it. Much like how we hate having our parents/relatives being so nosy and involved in our business at times, Mindy Lahiri isn't a fan of having nurse/friend Morgan move into her apartment on top of his already overbearing antics.

Deep down, Dr. Lahiri does realize how lucky she is to have such a caring work family - and I'm sure that despite our eye-rolling and frustrations, we're grateful for our close-knit family and friends too!

10. She's the first Indian-American woman to have her own primetime TV show in America, and that's pretty damn cool

It's even more amazing that the show isn't typecasted about being about "that Indian woman" - The Mindy Project is just about "that crazy/hilarious/hopeless/inspirational/awesome woman." Kaling's humor spans all ethnicities and backgrounds, but her hard work and success is definitely a motivation for South Asian women to follow their dreams.

Mindy Kaling broke traditional barriers by proving that Indian women can be just as funny, just as sexual, and just as unmarried and hilarious as any other single thirtysomething out there. It's not a question of heritage or upbringing - it's Kaling's talent and comedy that makes her an excellent role model. 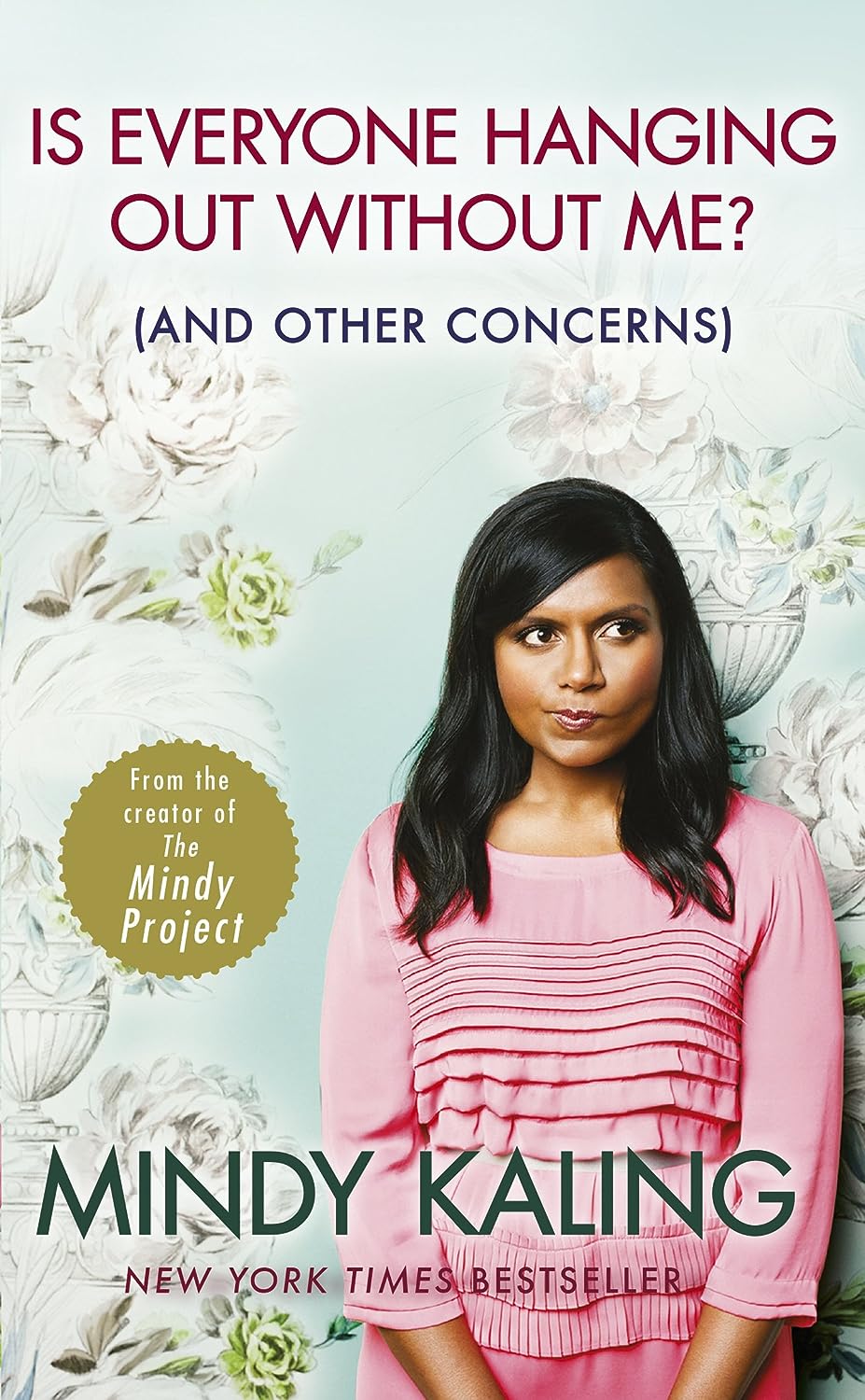 She's even a NY Times Bestselling Author - you go, girl!  Is Everyone Hanging Out Without Me? (And Other Concerns)

In today's world of female entrepreneurs and super stars, Mindy Kaling shines as a beacon of realism and relevant humor to South Asian women. While The Mindy Project resonates with a diverse range of viewers, we can take pride in knowing that the awesomely fabulous Dr. Lahiri also has some notable qualities that Desi women can draw inspiration from.

Visit Mindy on Instagram, Twitter, and her book, Is Everyone Hanging Out Without Me? (And Other Concerns)