After reading about the history and process of silk-making, you are probably a bit curious about the different kinds of silks.  Obviously the most common type of silk is the mulberry silk produced by the Bombyx mori silkworm, but that's not where it ends. Each state and region in India has its own unique take on the silk sari and there is a plethora of different types.

Below is a small glossary of  just some of the different silk saris of India.

Banarasi (Varanasi) Saris - There are four different types of Banarasi saris - Katan (pure silk), Kora (silk organza with zari), Georgette, and Shattir.  Banarasi saris are especially sought after in India because the practically scream opulence with all the gold and silver zari work, find embroidery, and high-caliber (read: thick and heavy) silk.  They are also some of the most expensive saris in India.  With their metallic effects, jali work, etc., Banarsi saris can take anywhere from 15 days to six months to complete. 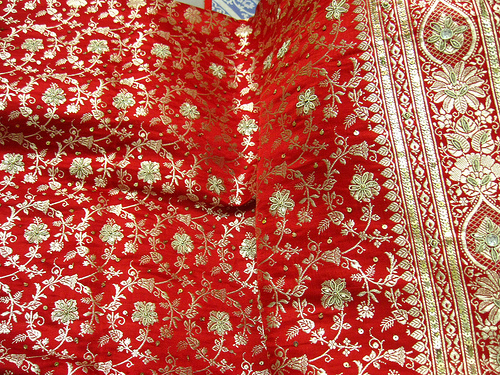 Bandhani -  Bandhani is the technique by which silk and other materials are tie-dyed.  They commonly have a repeating square pattern, with yellow dots in the center of each square, where the fabric is tied before it is dipped into dye.  These squares can form patterns over the cloth.  Silk bandhani saris are traditionally worn to Gujurati weddings.

Kinkhab (or Kimkhab) Saris - Kinkhab saris are a type of brocade sari from Gujurat with production centered in Surat, Ahmedabad, and Jamnagar.  They generally come in dark colors like deep purples, greens, and reds and they have fine zari embroidery throughout.  Common motifs include small human figures, flowers, birds and animals which are laid out horizontally along the sari's body and border.

Kanchipuram or Kanjivaram Silk Saris - These saris come from Kanchipuram in Tamil Nadu.  They are bright, shiny, and generally the most expensive saris in India because of their thickness.  They are only worn for special occasions.  Kanchipuram saris have a characteristic large stripe around the border of the sari as well as fine zari work.

Konrad Sari - These saris come from East Tamil Nadu in Kanchipuram, Salem, Arni Madras, Kumbakonam and Thanjavore. They feature a distinctive 10-40 cm plain color border with two additional narrow, patterned bands (called kampi or pettu) which are about 3 cm from each border edge.  The body of the sari usually contains stripes or checks while the pallu has heavy zari work.  Motifs include elephants, peacocks, double-headed eagles, triangles, and vines.

Don't worry, we'll be adding to the list! If you have a silk favorite not mentioned, let us know in the comments.