The Silk Road Part 2: The Process

The silk industry in India is HUGE and earns millions of dollars every year.  It starts with raising the silkworms which produce silk cocoons.

The most common type of silkworm used worldwide is the Bombyx mori. These worms produce what is generally referred to as mulberry silk (because they eat mulberry leaves exclusively). Silkworms used in India tend to be those that are native to silk-producing areas.  The state of Assam, for instance, produces three different types of silk, Muga, Pat, and Eri.  Two of these, Muga and Eri, use worms that are only found in Assam. 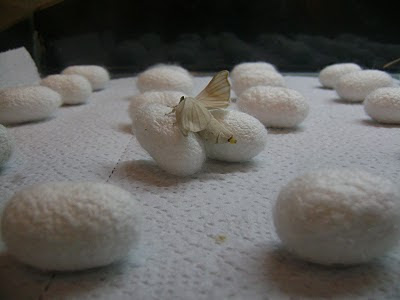 Silkworms are grown and harvested in very controlled environments to preserve each insect and its resulting cocoon.  The silkworm, which is a type of caterpillar, eats mulberry leaves throughout its lifetime to build up enough reserves to create a silk cocoon and transform into a moth.

These moths then mate and lay eggs, starting the cycle again. The cocoons are sorted by size, color, and texture.

From there they are gassed and/or immersed in a series of tubs full of hot and cold water to break down the protective sericin gum that holds the silk together in the cocoon.

The silkworm is often not allowed to escape before this process. By killing the moth before it can eat or claw its way out of the cocoon, silk-makers are able to ensure a long, unbroken strand of silk yarn.  It takes anywhere between 2000 and 3000 cocoons to create 1 pound of silk.

In rural silk production, the flattened cocoons are put out to dry in the sun after the sericin is removed.

Silk makers will reel the silk filament after it has dried.  To create a thread of raw silk, multiple strands of silk have to be reeled together - the natural strand is too thin to be woven effectively.

The silk is then dyed, bundled into skeins, and sold.

Silk is made and sent all over India to be woven into saris, scarves, dresses, and a variety of other goods.

If not made directly in to a pure silk fabric, these skeins are also made into a series of other textiles that have silk content.  These include crepe, chiffon, chinnon, organza, and satin.